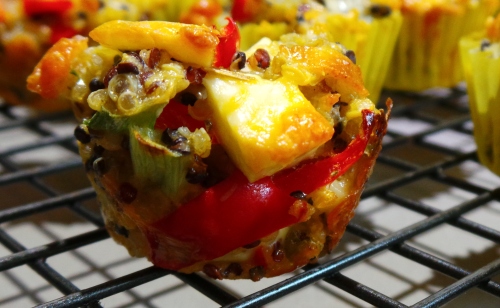 This post could quite easily be titled “Yummy things made from bits and pieces in the fridge” but it doesn’t have quite the same ring to it.

I came up with this recipe to use a heap of bits that were cluttering up my refrigerator. I had some tri-colour quinoa that was left over from something else, a bit of feta cheese that needed using, a handful (literally) of shredded mozzarella and half a red capsicum that also needed to be used.

It’s also turned stinking hot here again, after a week of almost chilly weather, and I consider finger food to be the way to go at times like these. Finger food in this house means something more-ish, but not junky. 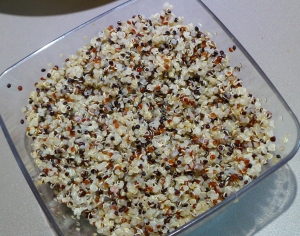 Quinoa can really be quite pretty.

Anyway, I came up with these here yummies to combine all the bits into something that The Boy declared he could, “literally devour by the handful.”

You heard it here first, Folks!

So, I started off with the leftover quinoa. The amount turned out to be two cups worth (which is going to look a whole lot more professional in a recipe), so that’s what I used. If you’ve not cooked quinoa before, you’ll find instructions here. If you don’t have quinoa then cooked rice of any colour or description would also work.

I popped it into a medium sized bowl and stirred in a couple of tablespoons of plain flour to help bind it together (it also gave me time to think about what to do next). If you have a celiac in your family then gluten-free flour will work too.

I’d decided that I wanted to make it a Mediterranean flavoured …whatever… so I added a tablespoonful of an Italian Mixed Herb blend that I had and a teaspoon of minced garlic. From a jar. Sue me. 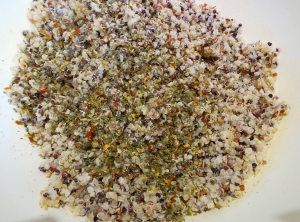 That was all mixed through quite thoroughly, then the red capsicum was diced and added. I was glad it was in there when I saw the finished products as it gave a pop of colour to something that might have been too beige.

Moving on. I also had one spring (green) onion so I sliced it up and added it too. Why not? 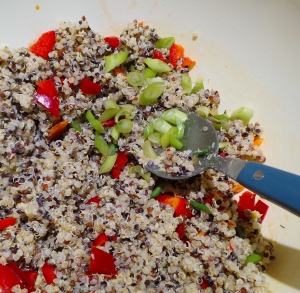 Next the Mozzarella went in and I contemplated the feta. I’m not a fan of feta, but The Boy loves it. However, I adore black olives, so I pitted and minced three of those and stirred them through. 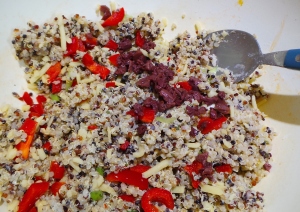 Then the feta cheese. I didn’t weigh it, sorry, but I’d say I had about 3/4 of a cup when it was chopped up. That was mixed through too. 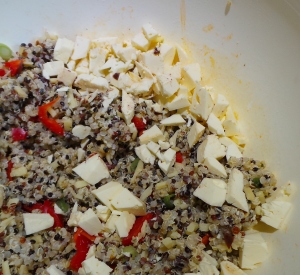 The Feta Cheese was next to be deployed.

I thought that looked like a rather tasty little mix and stopped adding stuff. If you are a hard-core carnivore, some diced ham or bacon would be a tasty addition too. You’re welcome.

Now, in between all the dicing and mixing I had decided to make something to bake, so at this point I turned the oven on and started gazing soulfully at my baking trays.

I have one for tiny little cupcakes/muffins that I rarely use and which seemed perfect for this, so I retrieved it and then went on the hunt for the paper cases that I knew were in the pantry somewhere…

They were found but I didn’t have quite enough, so I just sprayed the empty cups with oil.

The quinoa still needed something to bind it a little more, so I whisked up 2 eggs and mixed them through. Then I filled each cup with about 2 teaspoons full of the quinoa mixture, making sure that a piece of the capsicum could be seen on the top of each cup – because pretty. 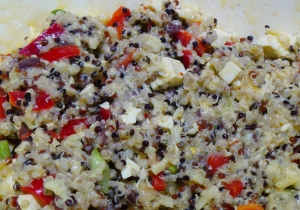 Mix in a couple of eggs.

Then the tray was placed in the oven for 20 mins, until the morsels smelled amazing and the cheese was starting to brown. 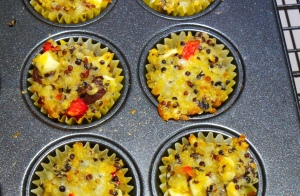 The Boy followed his nose into the kitchen as they were being retrieved from the oven and I had to stand guard until they were cool enough to eat.

These little mouthfuls of flavour will find their place in lunch boxes during the week, but they would be just as at home at a party or BBQ. They’ll keep in an airtight container in the refrigerator for 2-3 days, but try to bring them up to room temperature again before eating to allow the flavours to develop.

Hint: Get the kids to help you make them and they’ll be more likely to eat them. 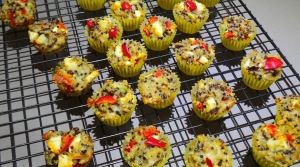 Place quinoa or rice in a medium-sized bowl and add the rest of the ingredients one at a time, stirring well between each.

Allow to cool in the tray before removing to a cooling rack.

Will keep in an airtight container in the refrigerator for 3-4 days. 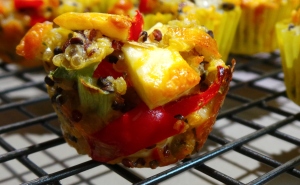 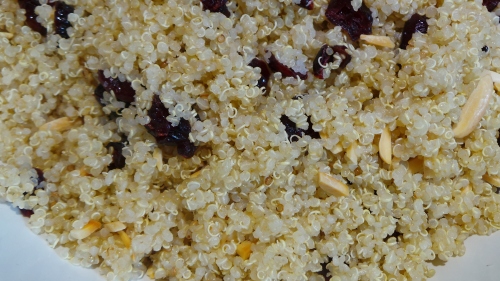 I’m posting this particular recipe in response to a request from my Dad, although I do hope everyone else likes it too.

It’s not really a pilaf in the strictest sense of the word – rice cooked in broth with other things then added – but it does resemble it and I’ll settle for that. 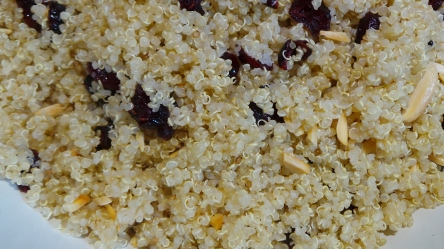 It contains an ingredient that seems to be one of the trendiest on the planet at this point in time, but I first learned about it in the early 1990s.

Not that I could find it anywhere, of course. Now it’s on the supermarket shelves. How times change.

I’m talking about Quinoa, an ancient South American grain that is unique in its nutritional profile. 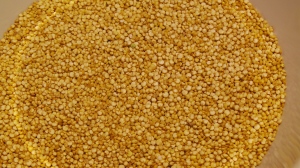 Quinoa in the raw

But before I go on, let’s address a matter of some importance…how to pronounce it.

If I hear anyone saying kwin-oh-ah, I’ll slap them.

Quinoa, as I was saying, is a little famous at the moment. It is a seed that has been in cultivation for thousands of years, but only commercially so for a very short time. Which explains its cost (more on that later).

Remarkably it is a source of complete protein, which makes it extremely valuable to vegans and vegetarians. It is gluten-free and rich in dietary fibre, magnesium and iron as well as being a good source of calcium – very handy for the lactose-intolerant.

It comes in white, black and red versions. I prefer the white, but that’s just me.

It’s not a large commercial crop though, and is on the pricey side. At my local supermarket it comes in at $2 per 100g or $10 for a half kilo (500g) bag. Bear in mind that it behaves somewhat like rice in that it swells when cooked, so one cup of quinoa will yield 2½ – 3 cups of it cooked. It can also be used in recipes that call for rice and I have made several quite successful risottos with it.

Please note that, even at that price, this entire recipe will still only cost you around AUD 4.50. 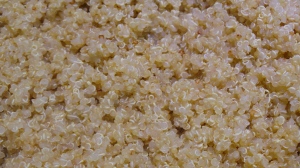 Unlike rice, it will give a large nutritional bang for your buck (see above) and not give you just calories and carbohydrates.

This dish is one I like to take to gatherings that require one to “bring a plate.” It’s simple, it has only three and a bit ingredients, it travels well, it caters for the gluten and lactose intolerant as well as vegetarians, it’s served cold and can often provide a talking point as everyone tries to work out (a) what it is and (b) how to pronounce it.  HINT: Keen – Wa

This dish is great for Christmas gatherings in Australia too as the colours of the craisins are very much of the season and the coolness of the dish is wonderful on stinking hot days.

The first, and most important, step is to wash your quinoa. It’s also the trickiest. Quinoa seeds have a chemical in their coating called saponin. It is quite bitter and may not all be removed on the way from the field to your kitchen. Wash it.

This can be difficult to do as the seeds themselves are tiny. Really small.  Think the tip-of-a-ball-point-pen small. 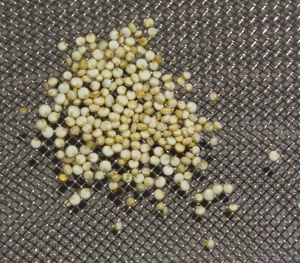 The quinoa is only a little larger than the holes in my finest mesh strainer.

They are easily washed through the holes of any sieves you may own. I have found myself a strainer with a very fine mesh that saves me from dumping the lot down the drain with the water. You may find that your current strainer works with the addition of a lining piece of paper towel, cheesecloth or a clean Chux. 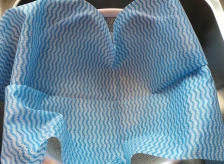 Line your sieve so you don’t lose your quinoa.

Place your quinoa in a bowl and cover with water, agitating gently. The water will turn cloudy, like this: 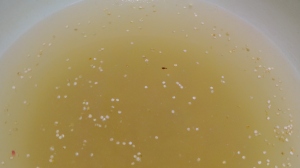 Drain through your sieve, return to the bowl and continue the process until the rinse water looks clear, like this: 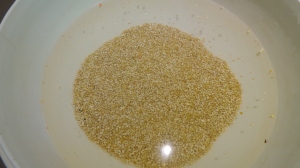 It will only take two or three turns.

While you are doing this, three-quarter fill a large saucepan with water and bring it to the boil. By the time the boiling point is reached, your quinoa will be clean and can be added all in one go to the pot. There is no need to add salt.

Set a timer for 15 minutes and just let it cook, stirring occasionally. 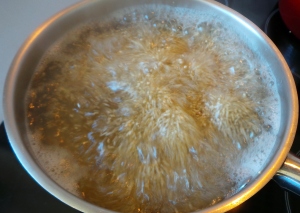 Let it cook at a roiling boil.

At the end of the 15 mins, drain it. You’ll notice that the seed has separated from its husk. Don’t panic, those aren’t worms through it. And yes, I have actually been asked this! 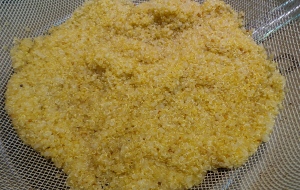 Run a fork through the seeds in order to facilitate proper draining as quite a bit of water can become caught. Leave it to cool thoroughly.

Now place your quinoa in a bowl and drizzle with a good glug of olive oil – as much or as little as you want.

Add your craisins (dried cranberries) and stir through. 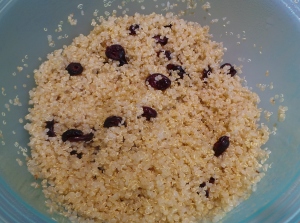 Now heat a small frypan and gently toast your slivered almonds. Toss or stir them constantly as they will burn quite easily. You will know when they are done when they are a gorgeous tanned colour and the smell is simply mouth-watering… 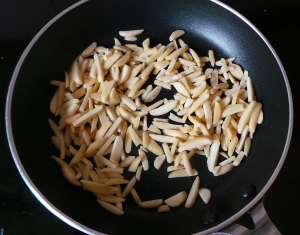 I use a little egg pan for toasting my nuts.

Add to your bowl, mix through and serve. 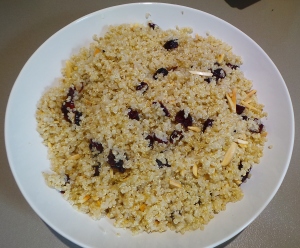 This will keep happily in the refrigerator for at least three days. You’ll find the colour of the dried cranberries will ‘bleed’ into the quinoa, which just makes it look even prettier for my money.

Apart from being ideal for gatherings, it’s also a great packed lunch option. Make up a batch on the weekend to be taken to work or school during the week to come.

Whatever you do, resist the urge to add anything more to this dish. It looks as though it needs something, but it really doesn’t. I added some parsley to it once and regretted it immensely. If you really can’t help yourself, then I would suggest some very finely grated lemon or orange zest. Then stop.

Rinse the quinoa well until the water is clear. This will remove any bitterness.

Fill a large saucepan ¾ full with water and bring to the boil. Add the rinsed quinoa and cook at a rolling boil for 15 minutes.

Drain the quinoa thoroughly and cool. It is helpful to stir the draining seeds with a fork to release any trapped pockets of liquid.

Place the cold quinoa in a large bowl and add a glug of olive oil to taste. Stir through.

Add the craisins and mix through.

Toast the slivered almonds until lightly brown, either in a frypan or in the oven on low heat. Watch them carefully as nuts burn easily. Toasted nuts smell fragrant.

Add the nuts to the pilaf and serve.

Will keep for several days in the refrigerator.