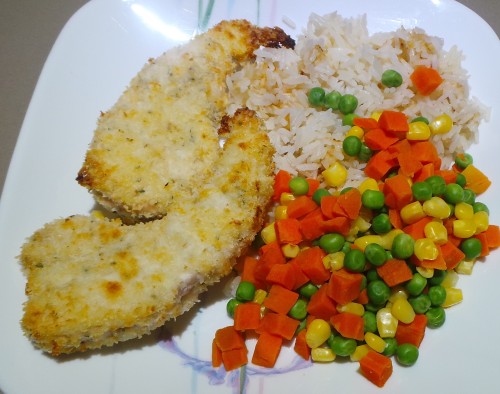 I have a confession to make. I’m not really a fan of chicken. I find it dry, bland and completely uninspiring.

Of course, this is because I have actually eaten free-range chicken used to running around on my grandmother’s farm all day and eating whatever it wanted; happy chicken. Happy chickens taste better than mass-produced chickens.

I can’t get my hands on a lot of old-fashioned chickens, so I really don’t eat it all that much.

Having said that, I understand that it’s all a lot of people eat – or that their kids will eat. With that in mind, I give you this low-fuss offering. It’s one you can double and freeze for those nights when you just don’t want to think about dinner too much.

This recipe uses about a pound or 500 g of boneless, skinless chicken fillets. You can use breast meat cut lengthwise into strips or, do what I do, and use chicken tenderloins. Thigh fillets would also work.

If you want to, you could even cut your meat into large dice and make your own chicken nuggets for small people’s dinners or finger-food at parties. Just sayin’.

As with everything on this site, play with it and make it your own. 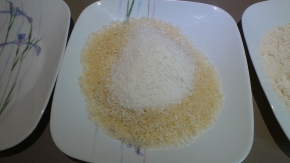 So, after it’s been cut to shape, the chicken is then seasoned with salt and pepper and put through an assembly line coating process. You’ll need three plates: one with plain flour, one with beaten egg whites and one with a mix of breadcrumbs and shredded or desiccated coconut. You can also get older children involved in this part, thereby cutting the labour for you!

(If following this advice, put the breadcrumbs in a bowl, not on a plate. Thank me later.)

I used Panko crumbs for this, because I like the crunchy texture. You’ll find them in the Asian foods section of your supermarket if you live in Oz. However, you can use plain old breadcrumbs if that’s what you’ve got. These are mixed with a fair amount of coconut just to change things up a bit.

I’ve also been known to add a touch of lime or lemon zest as well to give a bit of zing. If you like heat, a small red chilli sliced finely and mixed through the crumbs would add a touch of colour and spice.

So, grab a bit of chicken and dredge (cover) with the plain flour.

I added the salt and pepper to the flour, because lazy.

Then dip it in the lightly beaten egg whites, coating thoroughly.

Followed by a good dunking in the breadcrumb/coconut mix, patting it down quite firmly to make everything stick.

Mix it all together first. This just looked more interesting.

And that’s it. Pop the pieces on a baking tray lined with baking paper, spray lightly with oil spray and bake for 12 mins at 450ºF/ 220ºC, turning and respraying at the half way point. The oil spray is purely optional, but gives the finished dish a sun-tanned look, reminiscent of pan-frying but without the hassle… 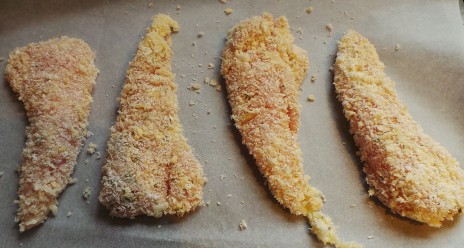 Serve with rice and vegetables garnished with a slice of lemon to squeeze over. If you’re serving them as finger food at a party, then a dipping sauce of aioli or sriracha mayonnaise would work a treat.

I tend to make this in double or triple portions and freeze them in giant snap lock bags when cooled. Then reheat at 350ºF/180ºC for 20 mins until heated through. Freezing the cooked chicken means you never have to worry about it not cooking through from frozen… 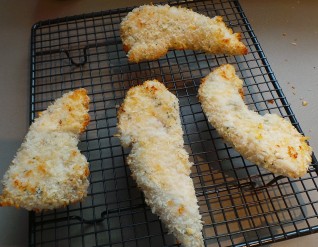 Cool on racks before freezing.

salt and pepper to taste

Cut chicken into strips about ½ an inch thick and season with salt and pepper.

Fill one with the plain flour.

Fill another plate with the egg whites.

Mix together the breadcrumbs/Panko and coconut and place on the third plate.

A few at a time, thoroughly coat the strips in flour.

Dip in egg whites, then into the coconut mixture. Press firmly to help the coating stick.

Place on a baking tray lined with paper and spray gently with cooking spray.

Bake for 6 mins on each side or until done. Spray again when turning.

Serve with rice and vegetables and a slice of lemon to squeeze over.

May be flash frozen when cool and reheated from frozen at 180ºC/350ºF for 20 mins or until heated through.