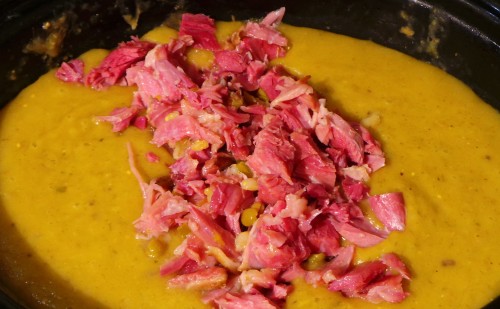 We have moved and, as those of you who follow me on FaceBook as well would know, cooking is being done.  Just not a lot of blogging.

Sorry about that. The move was rather more …traumatic… than anticipated and, being a brand new edifice, things keep popping up that need done – like, NOW.

Anyway, I’m getting there.

I thought I’d start back with something for the colder weather that is also the simplest of things to make. Coincidentally, it was also the first meal made in our new home. The weekend we moved had some of the bitterest weather this year (followed a few days later by actual snow!), so I had some of this going in a slow cooker on our new kitchen counter top; ready to be served up whenever we had a moment to stand still.

The soup can be as smooth or as chunky as you’d like it to be, just be aware that it is also a gift that keeps on giving. In other words, you may end up eating it for quite some time. 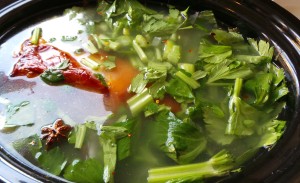 The pulses in the dish will continue to absorb liquids after you’ve finished cooking them, meaning you’ll end up with a semi-solid dish of leftovers in the refrigerator that really need water added when being reheated – which means your double-serving of leftovers becomes enough to serve four and so on.

Thinking back, Pea and Ham Soup was one of the first meals I made all by myself as a teenager. Why don’t you make it all by yourself too?

To make this soup requires a smoked pork knuckle or a hock. These are not inexpensive and they look hideous. As you can see.

However, they pack a massive wallop of flavour and the rest of the ingredients cost next to nothing. If your budget doesn’t stretch to one of these, then the same flavour can be obtained by using smoked pork bones (also available from the deli), you just won’t have the pieces of meat in the soup.

It will still be delicious though.

Now, I’m going to upset some of my readers and not provide specific measurements for stuff. That’s because I learned to make this from my mother and she didn’t use any. So there.

Start by dicing up an onion, a carrot and a couple of sticks of celery at a minimum. If you wish, you can also add parsnip, turnip, swedes and potatoes. A lot of supermarkets in Australia sell “Soup Packs” at this time of year and they usually have some of each of those in them. Peel them first, if you must. I don’t because I don’t peel anything I don’t absolutely have to. I’m not sorry.

If you are making this on the stove, then do all the following steps in a large pot big enough to hold your ham hock. If you intend to use a slow cooker, then start by sauteing your onion, celery and carrot in a little oil in a frying pan or skillet over a medium heat.

I used a leek instead of an onion here.

You’re looking to do what’s known as “sweating.”  In other words, you want to soften them and release some of their fragrance without browning them at all. I like to add a shake or two of fennel seeds to the pan at the end of this stage. It’s not traditional, but it tastes good, smells amazing and cuts some of the richness of the resulting soup.

Add the rest of your vegetables. If you are using a slow cooker, then transfer them to that.

The hard part is over now.

And doesn’t that look good-for-you?

Now, pour in enough boiling water to cover, put the lid on and let it come to a gentle simmer. 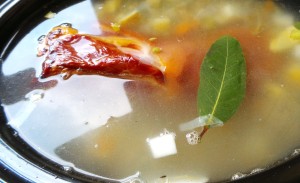 If you are cooking on the stove, you may want to remove the lid when it starts to bubble. Keep an eye on it too, stirring occasionally – the peas and barley will absorb liquid and you might find you have a suddenly dry pot. That would be bad.

It will change colour and start to thicken as the peas cook.

After an hour or two, inspect your ham hock. If the meat is starting to fall away from the bone, then it’s cooked. Grab a plate and a pair of tongs and retrieve your ham hock and bay leaf from your liquid. Now is the time to decide if you want your soup to be chunky or smooth. If you’d like it smooth, then a stick or immersion blender will do the trick nicely. If you’d like a mix, then use a potato masher in the pot until you reach a consistency you’re happy with.

I used a stick blender.

Now, remove your meat from the bone discarding any fat or skin. It can get a little messy, so I’d advise having a couple of plates to sort things onto. Discard the bone into the rubbish – DO NOT give it to pets! It’s now very soft and poses a choking hazard for dogs. 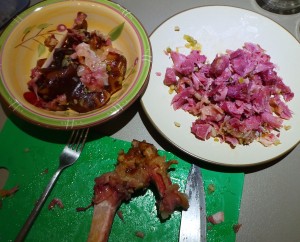 Return the meat to the pot, stir through and serve with crusty bread. 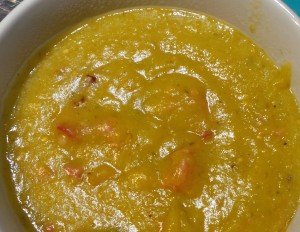