I spent most of the day elsewhere. First I made a couple of pizzas with this guy.

We were at my weekly lunch with the Intercultural Womens Network of Ballarat (free plug!) and they were my contribution. He was the only three-year old there and scatters toppings really well. 😉

Then it was off to replace my blood glucose monitor – which I appear to have left in the car from the driving assessment yesterday.

Dinner was never going to be complicated. Ever.

I hadn’t got anything out of the freezer and I couldn’t be bothered doing so when I got home. I just opened the pantry and pretended I was a teenager doing a survey of the refrigerator – you know exactly what I mean, don’t you?

I spotted a jar of Tikka Masala simmer sauce and thought, “Well, that’s a start.” That was emptied it into the baby slow cooker and followed with a tin of lite coconut cream. 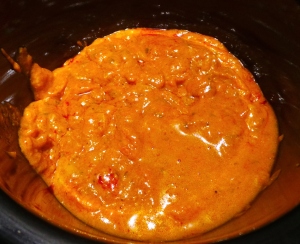 I chopped up half a red capsicum, then peeled and chopped up the seed end of half a butternut pumpkin and stirred that through. The crock was getting a little full, and I’d realised that I’d left my run a little late for using the slow cooker, so I transferred it to a Dutch oven on the stove top, where I added a tin of drained and rinsed cannellini beans. 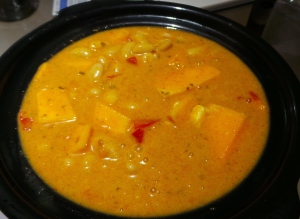 I realised I’d made a strategic error and transferred it to the stove top at this point.

It really only needed to simmer long enough to cook the pumpkin through so, while it did that, I put some rice on to steam and added some millet to the pot for something different. That came out looking like this. 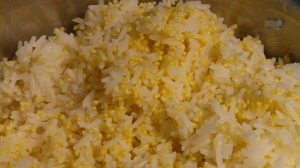 The curry was looking a little ‘samey’ so the freezer was raided and a bag of mixed frozen vegies was used to add some more texture and colour to the curry.

When they were heated through, the curry was spooned over the rice and served.

A meatless dinner with minimal effort and plenty of leftovers. That last point is important because we’ve got a long day in Geelong tomorrow, starting at stupid o’clock, and it was likely to end with takeaway if we weren’t careful.  Now that’s not so likely.